London had just peed out her diaper. I thought it was odd since London had not peed out of her diaper in months. It could have just been that whoever changed her diaper last did not get a good seal.

I couldn’t quite believe it so I dabbed my hand on the big wet spot on London’s right pant leg. This was not some ordinary pee. This was some extremely sour-smelling stuff. As I brought my hand to my nose I finally realized it wasn’t pee.

Let me back up thirty minutes. We were all finishing dinner when London tooted. And by tooted, I mean it lasted five whole seconds. Then a few seconds later, another long toot. A few seconds after that, one more small blast. Kate and I looked at each other and sort of laughed, but London’s toot was not too extraordinary. She had done this before, but it had been a very long time.

We moved into the kitchen. Tonight, we kept London in the high chair as we cleaned the dishes. She kept snacking some, but seemed particularly moody so we decided to get her out of her high chair. And now, we are all caught up to the moment when it dawned on us that London, for only the second time since we brought her home from the NICU, had a poop blowout.

Luckily, we could tag team this. Kate grabbed some plastic bags. I carried London a good two feet out in front of me as we went upstairs to the bathroom. Once there we did a cursory examination of what was in front of us, deciding on how we were going to approach this horribly smelly and pasty mess.

To our benefit, London was wearing a onesie, which she just barely fit in, one that we weren’t particularly attached to. Scissors it is, but first we had to peel her pants off. As we did so little pieces of poo fell to the tiled floor. I could feel the extra weight of the pants as I moved them aside.

Once I returned to the bathroom with scissors, I held London and Kate cut down the back of the onesie and it fell to the ground inside the plastic bag London was standing on. Next, the diaper. A new bag for London to stand on. We just loosened the velcro-like straps of the diaper and let it fall off London. Pushing that mess aside, I grabbed the bathmat for London to lay on while Kate cleaned London up a little bit. She was not nearly clean enough to sit in a tub.

Kate asked, “What about the pants?”

“Oh, I’ll clean out what’s in there and I think they’ll be fine.” I picked them up, started to turn the oozy side inside out and immediately gave up. “They’re done for,” I said, as I plopped them into the plastic bag with London’s onesie.

Kate got to giving London a bath. I thought I’d check out the high chair because I knew it was going to be messy. I had seen some remnants in the seat before we went upstairs, but I didn’t really know how bad it was. First, I attacked it with bleach wipes, a lot of them. It looked good to me after that. Hold on, what’s beneath on the reverse side of the high chair cushion? Well, it was a brown stain bleeding out from the hole in the cushion, which part of the buckle slips through. 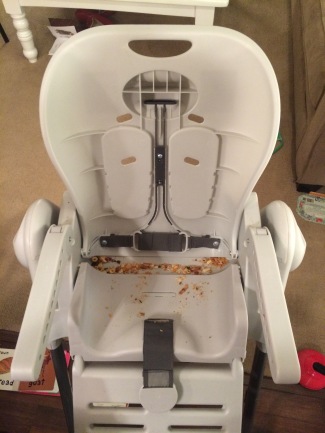 Breakfast cereal, quesadilla, and a little bit of everything else.

I took the cushion off, flipped it over, and hit it with some more bleach wipes. The tag of the cushion read, “Do Not Wash. Hand Clean Only.” Throwing it in the washer seemed necessary at this point. Costco bleach wipes can only do so much. I scrubbed and scrubbed, but that sour smell was still there.

London was out of the tub by now and getting dressed, so I took the cushion upstairs, filled the tub with scalding water, and put in enough laundry detergent for several loads. I threw the cushion in the tub and made sure it was waterlogged before I left it there.

Back downstairs there was one last mess to clean up. I hadn’t fully cleaned London’s high chair in months so when I took the cushion off I discovered a pretty thick strip of food. I saw fossilized quesadilla, Crispix, Cheerios, and other food ground down to unrecognizable particles. I was going to vacuum it, but Kate told me to just dump it in the backyard. I lifted the chair up and out the backdoor and flipped it upside down once I was over the grass. Success. No vacuuming necessary and the lawn got fertilized with breakfast cereal.

The high chair cushion took two days to dry out in the backyard, but now London’s high chair is as clean as it was when we first got it. And, we only lost a onesie and some pants.

2 thoughts on “What Lies Beneath”