“How old is she?” The simplest of questions for parents of full-term babies to answer, but not so for parents of preemies because there are two answers for this one question.

At some point, a baby arrives so early that their actual age is going to be different from their developmental age. For example, my daughter, London, was born at 26 weeks gestational age, three months early. Her birthday is January 30, 2014. Her developmental birthday is May 4, 2014. This means London’s adjusted age is 11.5 months, even though she’s been with us for 14.5 months.

So how do I answer the question, “How old is she?” Well, sometimes I lie. If the person asking is asking because they are wondering why London is not walking and or talking because she’s the size of some two-year-olds, I lie and give them the adjusted age. By doing so, I direct the conversation toward the obvious and usually hear something like this: “My God, what a big baby.” I would much rather talk about how big my baby girl is than tell the person the truth and then have the conversation inevitably slide toward how London is, developmentally speaking, three months behind.

That said, I think most of the time I tell the truth and answer, “Almost 15 months,” because most people, whether they dwell on my answer or not, just aren’t going to say anything else. But I know, because I’ve seen it in their eyes, that when I say London’s real age some people look a little confused. I don’t know what they are thinking exactly, but it’s something along the lines of:

“She should be crawling by now.”

“She should be walking by now.”

“She should be talking more by now.” 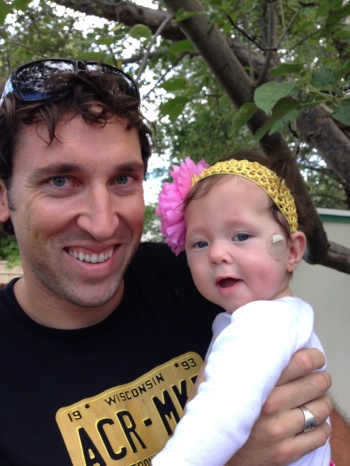 At seven and four-months old.

When I feel this reaction in people I know I could take the time and explain London’s two ages, but somehow just saying, “She was born three months early,” sounds cheap because I’m taking this huge, scary part of our lives and trivializing it in six words. Plus, the majority of people will not be able to comprehend what those six words truly mean. Getting stranger after stranger to comprehend that over and over again can be exhausting. I know, because I would make a casual effort to explain London’s prematurity to nearly everyone that asked. This was right after she came home from the NICU. Still on oxygen. Still rocking cheek patches. NG tube still snaking across her face. Understandably, those people who asked how old she was back then knew they were probably going to get something more than, “3 months.” But after a while, parents of preemies tire of going into the explanation thing. So, like parents of full-term babies we get back to basics with a simple, short answer, “Fourteen and a half months.”

Or am I going to say, “Eleven and a half months,” this time?