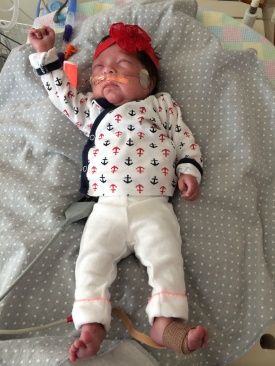 One of my favorites. Her 2-month birthday. “To infinity and beyond.”

As badly as I wanted London to leave the NICU I was also terrified of some of the things she would lose when we walked out of that hospital. 24/7 caretakers. A team of RNs, NPs, and MDs just feet away. The opportunity to talk to one of them whenever we wanted to and to ask the dumbest questions of.

As a parent, you do grow accustomed to having your baby in the hospital 24/7. It is comforting to know that your child has the best babysitters in the world.

While London was still in the hospital I wrote:

Right now I feel like taking her home will be bittersweet. I’ll be beside myself, in a good way, when we walk into our house holding London, but it’ll also be frightening to leave our NICU family.

Back then, the approaching discharge date meant exposing an already fragile baby to the terrors of this world like driving home with her! Or contact with the public, those creepy baby oglers who think they have the right to walk up and touch your child just because she is the cutest thing they have ever seen. Can’t stand these people! We would be responsible for a baby, yes, but also all the leashes that come with her: NG tube connected to a feeding pump, an oxygen cord, and a pulse ox connected to her foot. Monitoring all that could be overwhelming on top of normal baby duties.

But a baby has to leave the NICU eventually. We had our gambles and triumphs there in that pod, but the good stuff was to be found in life beyond those hospital walls. It is hard to think of leaving the NICU as anything but a tradeoff. An adventure was before us, filled with successes and failures, loss and gain, losses and victories. But behind us was London’s NICU pod, which, for her parents, became the safest place in the world.